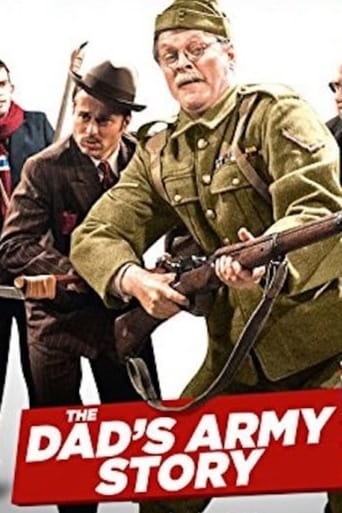 Comedy drama about the beginnings of Jimmy Perry and David Croft's writing partnership and their struggles to get Dad's Army on the screen in 1968.

Stometer Save your money for something good and enjoyable
Lawbolisted Powerful
Derrick Gibbons An old-fashioned movie made with new-fashioned finesse.
Billy Ollie Through painfully honest and emotional moments, the movie becomes irresistibly relatable
dgjones-62258 If you liked Dad&#39;s Army then you will like this show. A superbly well written account of the difficulty of getting the show together. I was quite surprised how much I enjoyed watching the cast being assembled (John Sessions is brilliant as Cap Mainwaring). I&#39;m not a fan of period dramas, but I thoroughly recommend this one.
l_rawjalaurence In the pantheon of dramas based on well-loved television programs, such as THE ROAD TO CORONATION STREET (2010), WE&#39;RE DOOMED was unexpectedly affecting.Based on the origins of DAD&#39;S ARMY, it had Jimmy Perry (Paul Ritter) trying to make the best of a career as a jobbing actor, being unexpectedly asked to join the cast of BEGGAR MY NEIGHBOUR, a BBC sitcom starring Reg Varney and Hattie Jacques, produced by David Croft (Richard Dormer). Perry showed Croft a draft script of a comedy based on the Home Guard, and the idea for DAD&#39;S ARMY was born.Steve Bendelack&#39;s production showed the difficulties the duo had in trying to get the sitcom off the ground in the face of opposition from BBC One controller Paul Fox (Keith Allen) and a skeptical head of Light Entertainment Tom Sloan (Stuart McQuarrie). Casting also proved problematic, with the part of Mainwaring being turned down by Thorley Walters and Jon Pertwee among others, before Arthur Lowe (John Sessions) accepted the role. Eventually the cast was assembled, and episodes recorded, but the show&#39;s teething troubles were not finished yet, as Lowe in particular found it difficult to remember his lines. Nonetheless, a first series of six was recorded, the first of which went out in July 1968. The rest, as they say, is history.WE&#39;RE DOOMED made a lot of the often difficult relationship between Perry and Croft, with Perry forced to give ground on several issues, including playing the part of Private Walker. In the end the decision proved the right one, and Perry gave up his career as an actor to become a full-time - and highly successful - writer. Sessions&#39;s Lowe also came across as difficult, with many of his basic insecurities as an actor concealed beneath a veil of bluster. He was certainly one of the ensemble that made the sitcom such a hit, but it was difficult for him to accept the company ethic.Some of the impersonations of real-life actors were better than others, but one of the highlights of this production was Roy Hudd&#39;s turn as Bud Flanagan, recording the much-loved theme tune. The veteran actor-comedian is one of the few left these days who actually grew up in the music-hall era; and had played Bud Flanagan many years ago in the stage show UNDERNEATH THE ARCHES. His rendering of the theme song was both poignant yet funny, a reminder of what the sitcom as a whole represented for millions of viewers.
tonyhancock Well written and wonderfully acted. This could have been awful.....instead the cast was just about perfect and a much loved comedy series was warmly remembered and beautifully represented.John Sessions is nothing short of incredible as Arthur Lowe. The scene with Roy Hudd, as Bud Flanagan singing the Dad&#39;s Army theme tune, is enough to bring a tear to the eye of a grown man.The acting was, as Sgt Wilson might have said, was all rather lovely, the script was gentle and absolutely as it should be for such a wonderful subject matter.This was the best hour of TV for me in 2015.
Prismark10 Paul Fox as Controller of BBC1 commissioned Monty Python&#39;s Flying Circus. I mention this because according to this drama he is portrayed as a humourless burk.Then again We&#39;re Doomed: The Dad&#39;s Army Story needed drama and the best they could come up with that some BBC bigwigs were short-sighted, did not like it and might not broadcast it.As for the rest Paul Ritter plays it broad as Jimmy Perry, the frustrated actor who turns to writing and writes about his time in the Home Guard. He was very much the Private Pike, fresh faced type. However Jimmy Perry has appeared a lot on television over the years to talk about his successful writing career and seems little like the character portrayed here.John Sessions known both for acting and impressions does a good turn as Arthur Lowe. Julian Sands a perennial contender for the worst actor in the world award fails to convince as John Le Mesurier; a character that has popped up in other biopics such as Tony Hancock&#39;s and Hattie Jacques.However to me it was the story of Jimmy Perry and David Croft getting an idea for a sitcom off the ground which is still getting great ratings even today with its umpteenth repeat on BBC2.We have had several making of drama documentaries in the last few years. The best so far has been The Road to Coronation Street, which had a heart and grittiness of the launch of a seminal programme.This just was pleasant enough. There was some sweet moments such as Arnold Ridley talking with Perry about hitting hard times and had to sell off his rights to his plays. There was the joke about Jon Pertwee being interested in the part until being told how much he was going to be paid. John Laurie being irate that Private Fraser had no fully formed character but he never turned down a part.It was nice to see Roy Hudd as Bud Flanagan recording the theme song. It was meant to be Flanagan &amp; Allen but Chesney stopped performing due to ill health. Ironically it was the final work done by Flanagan, Chesney lived until the early 1980s.